ON THE BARBECUE TRAIL

STONE MOUNTAIN, GA--Each year for about a decade I’ve shared barbecue experiences with readers and listeners, often daring to whisper an occasional opinion or recommendation about the All-American food, dear and delicious smoky barbecue. Down here near Atlanta, pork reigns. It’s the meat of choice with no close second, although plenty of places do chicken and beef right. 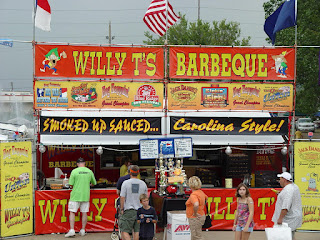 The history of barbecue and its preparation will not be in my food, wine and spirits columns. Rather, finding the best places-restaurants, café’s, shacks, roadside tents-where you can drop in knowing that everything is prepared with a whole lotta' love is the goal. I’ll stick my neck out and say that no state really has a corner on barbecue. The style, spicing, wood, pit, sauces and preparation aren’t confined to state boundaries. However, there are pockets of cooking methods that do hearken to tradition and have been preserved by good cooks over many decades.

And, therein lies the mystery. Who are the ones that keep local traditions alive? What keeps everything original? What causes good people to come back month aftr month, year after year?

Most of all, where can we find these people and their food?

What they have in common is a commitment to quality barbecue. It’s an art form, one of the few flawless collaborations that really make people happy.

I’m on the road in the heat of summer in Dixie looking for the barbecue that stands out from the rest. The sauce that is made with love. Real Brunswick Stew. And the wines, cocktails and beers that magnify the barbecue experience.

Looking for a worthwhile vacation featuring new places and smiling faces? The Mississippi Gulf Coast is a winner:
http://global-writes.com/2012/06/mississippis-gourmet-gulf-coast.html
Posted by Doc Lawrence at 12:58 PM No comments:

ATLANTA--Location, location. It remains important in the success formula and 4th & Swift, Chef Jay Swift’s wonderful restaurant is a stone’s throw from the busiest thoroughfares in the South, yet comfortably nestled in a quiet location with very ample parking. The adventure is confined to the dining experience, not the nightmare of navigation and parking which burden many Atlanta restaurants. 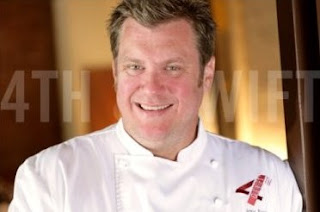 A Baltimore native, Jay Swift has a menu reflecting Deep South preferences, all enhanced with an imaginative cocktail and wine program that blends into the overall enjoyment.

I was asked by my companions, a distinguished assemblage of ranking officials from North Carolina’s renowned Harrah’s Cherokee Casino and the Cherokee Tribe to select a restaurant for an evening of food, drink and conversation that was emblematic of Atlanta’s reputation as the unofficial headquarters of New South cuisine. That’s daunting if you take such requests seriously. New South is in the eyes of the beholder and since I am an Atlanta native and have a track record that includes years of dining in many other Southern cities, I made a studied decision.

For one evening, I was a prophet: 4th & Swift, featuring Chef Jay Swift.

Begin at the bar. There are bottles upon bottles of handcrafted bitters along with standbys like Peychaud’s, the magic potion in the Sazerac cocktail. The cocktail menu features some high-octane delights like “The Cries of Silent Men,” invoking images of Southern existentialists like Walker Percy. It’s a Gin-based witches brew with secret elixirs. Maybe topped off with  eye of newt? One can only guess, but all can enjoy.

Dinner was a gentle immersion into the best of Dixie. Several ordered the chef’s special, Three Little Piglets, while I spotted braised short ribs from Will Harris’ renowned grass-fed beef farm in South Georgia. A bottle of Argentine Malbec enhanced the experience, and the Chef’s special ricotta-stuffed squash blossom appetizer paired well with chilled Pinot Gris from Oregon. The wine list symbolically states that management takes its diner’s needs seriously. What you see is reasonable and compatible. Many outstanding wines are also available by the glass.

An evening here includes amenities that make pleasant memories. Spacious seating with comfortable tables. The noise level is low. Conversation flows uninterrupted by those dreaded cries of dining banshees, something that can ruin an otherwise terrific evening. They must have been in other restaurants on this evening.

Jay Swift has perfected the balance in great dining: Food, wine, cocktails and ambience. Here’s a place to get to know someone. The dining ritual is the near perfect way to reach out and build bridges of understanding; and 4th & Swift must have had this in mind from the inception.

Turning vision into raves from happy diners isn’t easy. 4th & Swift is a template for gourmet excellence. This is easygoing, elevated dining, the Atlanta food experience we deserve.

Enjoy the delights of dining, wineries, recreation and travel: www.winesdownsouth.com
Posted by Doc Lawrence at 6:49 AM No comments:

A FEAST FOR MY FATHER 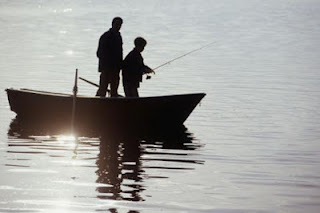 In my hometown of Atlanta where we never stop celebrating Gone With The Wind. I recall how much Gerald O’Hara, Scarlett’s Irish-born dad loved his wife, children and, of course, Tara, and how proud Rhett Butler was to be a father to a little girl. Fathers are special and those like me who are lucky enough to have theirs still around, should think about a feast as we celebrate the men who occupy this hallowed status.

Dad remains my hero. A combat soldier in World War II who still hates war, a good and decent man who did his best to give his family a wonderful life and never thought of expecting anything in return. But, my father also enjoys good food, particularly things that are farm fresh, often advising me during my adolescent “know-it-all” days that home grown tomatoes would extend my life.

My feast for Father’s Day is what I would serve the great blockade-runner and smuggler, Captain Rhett Butler, a man who enjoyed the finer things in life and, according to Margaret Mitchell’s book, got what he wanted. Because Rhett Butler was from Charleston, the great epicurean center of the Southern Atlantic Coast, lived in Atlanta, traveled to Paris and New York, and had business in New Orleans, we can assume that he loved Champagne, was very familiar with the wines of the world and had a refined palate that was attuned to great dishes that, as we say down here, were properly prepared.

We’ll begin his feast with a few pours of chilled Champagne served with snacks that are salty. Caviar (quality domestic caviar is available now) in some form; perhaps something with anchovies? This will stimulate conversation and invigorate those appetites.

The first course should have roots in Charleston and Savannah, two cities that have a related food heritage. My choice is She-Crab Soup, that fabulous dish made with crab roe and seasoned with a touch of fine sherry. I would not hesitate, by the way, to serve a quality semi-dry sherry with it.

Next, to honor my father, Atlanta, Scarlett and Rhett, I’m serving roasted pork loin in Port with prunes according to that great Southern cook Edna Lewis’ recipe. The wines for this rich, flavorful entrée will be a choice of Chambertin, the magnificent red Burgundy that was Napoleon’s favorite and, for those who prefer something more robust, a Tannat from Uruguay. (Try one bottle soon and you’ll be hooked.)  Ms. Lewis lived for many years near Atlanta and her recipes and wonderful stories occupy many pages in her collectible cookbooks.

In 1945, Dad was a military attaché in New Orleans to the World War II hero General Jonathan Wainwright, and even lived for security purposes in the Presidential Suite of the historic Roosevelt Hotel. To complete my feast for Dad, I selected a dessert, Charlotte Russe, a dish I once devoured at a private dinner at Antoine’s, the fabled French Quarter gourmet shrine. The whipped cream, custard, berries, ladyfingers creation is memorable a quarter century later and it is good and rich enough to salute my best friend and life mentor. Wine? I saved an Australian treasure: a 2001 Botrytis Semillon from New South Wales. It’s rare, valuable and would be hard to equal.

Just like the super fellow with such a big heart I’m honoring this Sunday.


Wish that I was on ol' Rocky Top
Down in the Tennessee hills
Aint' no smoggy smoke on Rocky Top
Ain't no telephone bills
Rocky Top you'll always be
Home sweet home to me
Good ol' Rocky Top
Rocky Top Tennessee. 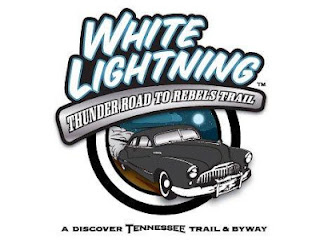 KNOXVILLE, TENNESSEE-A journey into the land of White lightening, 200 miles of history, beauty, adventure, and charm, begins just outside of Knoxville’s famous attractions and little-known sites. This trail gets its name from the route’s legendary history as a moonshine-running corridor during the prohibition era. It was a time when rebels careened around these curves, transporting illegal, homemade corn whiskey under the cover of darkness to avoid the law.

I’m off to visit historic towns whose famous thrill-seeking outlaws unknowingly laid the foundation for today’s stock car racing, experiencing the natural beauty of East Tennessee, anticipating that much of it remains as it has for hundreds of years. Its mountains are laced with might streams like the Powell, Nolichucky, French Broad and Holston Rivers. These ancient forces, harnessed by the Tennessee Valley Authority to generate electricity, created vacation hotspots Norris Lake, Douglas and Cherokee Lakes, beautiful bodies of water that draw thousands of visitors each year. Along the way, my journey will explore the picturesque mountains, traveling along the path first cut by Daniel Boone.

Highlights include a stop at Dandridge, the second oldest town in Tennessee (ca.1792), a delightful mixture of old and new. Today, downtown Dandridge is a National Historic District showcased by the courthouse completed in 1845, a prime example of Greek Revival architecture. Next is Russellville and an opportunity to learn about the headquarters of Confederate General James Longstreet during the winter of 1863-1864. Morristown is home to Bethesda Church, a quaint old building with high-backed pews and an enclosed pulpit, one of the oldest churches in this section of the state. The church was built in 1835, and was later used as a hospital for wounded Union and Confederate soldiers. There are approximately 82 unknown soldiers buried nearby.

When you think of Tennessee, Davy Crockett comes to mind. Morristown was the American hero’s childhood home and has a museum containing artifacts from Davy's childhood, telling the story of this legendary figure in American history who died fighting at The Alamo.

I’ll be reporting on legendary places like Clinch Mountain, Cumberland Gap, Joppa Mountain Pottery, and describing the museum in Maynardville that provides a glimpse of the heritage of Union County. The museum has a reference library with genealogy lines of many families connected to Union County, known as the "Cradle of Country Music." This is the home of the Grand Ole Opry’s Roy Acuff, Chet Atkins, Kenny Chesney, Lois Johnson and Carl Smith.

This will be the launch of a series of vacation ideas that appeal to those visiting the South during the Civil War Sesquicentennial as well as those who yearn for real adventure, preferring travel closer to home.

Join me in all the fun.


Looking for better travel in Florida? Read about what many describe as "Original Florida." With the Sunshine State set to celebrate its 500th Anniversary, here's a few places to visit:
http://global-writes.com/2012/05/tallahassees-culinary-triangle.html
Posted by Doc Lawrence at 8:18 AM 1 comment: