TAILGATING DOWN SOUTH-BORN IN A BATTLE

It's the ultimate American feast where community literally means thousands gathering on a given Saturday somewhere in the college football stadium lots coast-to-coast. Tailgating conjures wonderful images of laughter, food, beverages, friendly folks dressed to reflect loyalties than often run deep. Here, there is one unifying purpose: feed the masses and win that game.

According to no less an authority than National Geographic, tailgating originated early in the Civil War. Frank Spence, a Nashville native who resides in Atlanta echoes this. Spence, a peerless raconteur now a retired Atlanta Falcons front office executive tells a spellbinding story. "Congressmen and their beautiful ladies arrived just outside Washington to view their 'team,' the boys in blue in the Union Army kick the Confederates from the fields of Manassas into oblivion." Stonewall Jackson's army, continued Spence, turned them back and "they fled back across the Potomac. The civilian revelers quickly followed in what history calls 'The Great Skedaddle,' leaving all the food and Champagne for Jackson's soldiers to enjoy."

One dessert, Charlotte Ruse, was in an abandoned wagon and soon after the end of the war, it was duplicated and served in Baton Rouge. 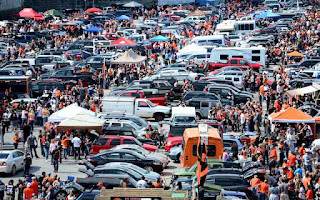 The celebration was brought home and blended into college football which emerged shortly after the war. Fans gathered peacefully, wearing colors associated with their favorite teams and over the years spread tailgating throughout the country. Today, it's just as much a part of a game day Saturday in Athens, Georgia as Ann Arbor, Michigan.

The 2017 edition of tailgating kicks off this weekend with the historic double header in Atlanta's Mercedes-Benz stadium with FSU taking on Alabama and Tennessee doing battle with Georgia Tech.

I'll be there looking for that gifted kitchen wizard who is talented enough to make and bring along a regal Charlotte Ruse. 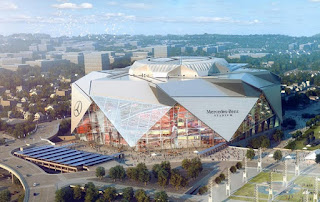 Lakeland, a college town of 200,00, is home to the most buildings designed by Frank Lloyd Wright on a single site in the world. Florida Southern College brings visitors from the four corners to behold the 12 buildings, all connected by Wright's walkways he called Esplanades. The college is on the National Register of Historic Places and was named a National Landmark of the United States. 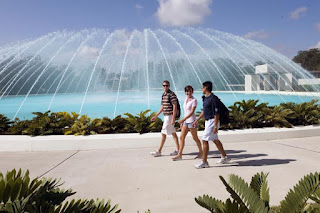 Wright the genius was also Wright the enigmatic architect. Controversial, daring, tragic and at all times revolutionary, the American design landscape would never be the same.

The college project became the longest-lasting commission of his life. Wright agreed to create a masterplan for the campus and to design 18 buildings. Ultimately, the college completed 12 structures during the historic 20-year expansion period.

Described as"learning spaces, working spaces and gathering spaces." other architects have called the campus "Wright's Village" for the sheer number of Wright-designed buildings and because it is the finest example of Wright's style of "organic architecture" anywhere in the world. 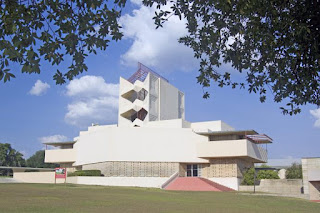 Clean lines, natural design elements and locally sourced construction materials are hallmarks of Wright's work. The buildings reflect the unity of all things, and are built to a human scale, with similar construction materials. With the exception of one building, all are linked together by a series of covered walkways that Wright called "esplanades."

Wright's design was radically different from the typical design of an American college campus, an extension of his belief that Americans needed to create their own culture that was not based on classical or European design.

The Florida Southern campus was the first American college campus to be designed in the "modernist" architectural style. Geometric shapes and patterns are seen throughout the campus: circles bisect a rectangle. The Danforth Chapel incorporates triangular patterns and has a triangular-shaped roofline that extends out into a point. 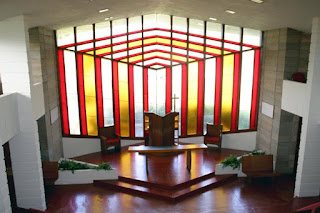 Wright became familiar with local orange groves allowing the land to inspire him. Wright's design confirms that he understood the potential of the Florida landscape, and according to college archives proclaimed that "every building is out of the ground into the light — a child of the sun. Buildings should seem to grow from the earth and belong as a tree belongs."

Wright's first building was the magnificent Annie Pfeiffer Chapel, the spiritual centerpiece of the campus featuring a three-level concrete tower that rises to 65 feet. Each level of the concrete tower has a cutout geometric shape that resembles a "bowtie." That geometric symbol is now incorporated into the design of the official college logo.

The Water Dome, one of Wright's most impressive designs, is not a building. Wright thought of it as a gigantic circular "fountain of knowledge." Wright, in keeping with the mission of a center of higher learning, left a cultural heritage for future generations of Americans. This is original Florida. A  higher life. Wright's gift is his recognition that we are enriched when we stir the imagination. 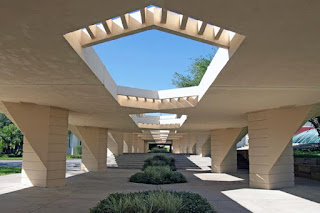 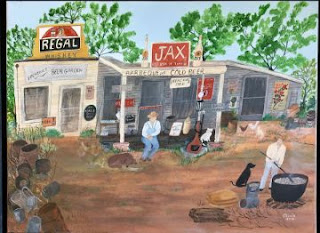 The headquarters for original folk art might just be in the central Florida town of Sanford. Jeanine Taylor’s gallery is located in a historic building downtown where she has showcased many artists of varying backgrounds and styles for years. The South is a trove for this cultural treasure and much of the art at this gallery is a mixture of well-known and emerging.

In other words, it’s fascinating. 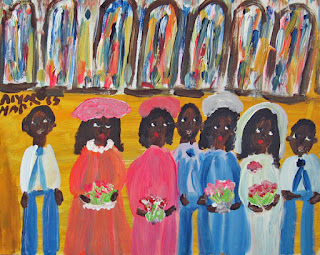 Jeanine Taylor says that the warm southern breeze “will blow strong” for the opening reception for the public on Saturday, August 19th, adding that “sweet tea will be served.” 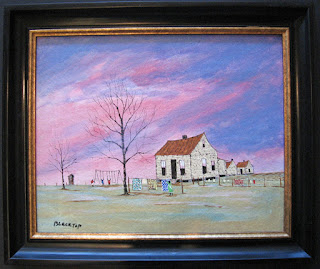 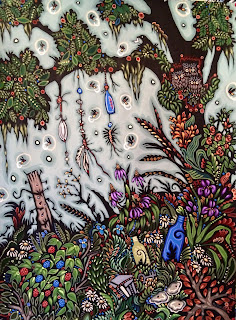 Posted by Doc Lawrence at 8:16 AM No comments: