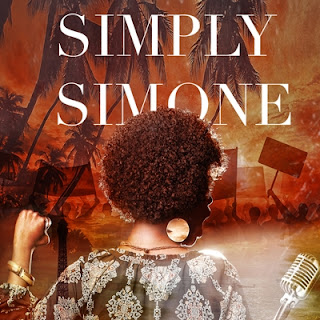 I came close to meeting Nina Simone who performed in Atlanta for the Atlanta Jazz festival, at Morehouse College and at Chastain three years before her death. That emptiness was finally filled while I, along with a packed house, was immersed in the timely and powerful musical, Simply Simone at Atlanta’s Theatrical Outfit. With 32 songs performed by four very gifted women portraying Nina Simone from her childhood in Tryon, North Carolina to her performances in Carnegie Hall, foreign countries, jazz clubs and the Newport Jazz Festival, we were treated to a tour de force of much of America’s greatest music.

A complex and passionate Nina told the world that she was not a diva, but The Diva. There are four talented actresses portraying Ms. Simone at different stages of her life: Marliss Amiea, Tina Fears, Chani Maisonet and Chelsea Reynolds. The musical review kicks off with the double entrendre-loaded I Want a Little Sugar in My Bowl followed by My Baby Just Cares for Me, and then Simone’s best-known song and her first hit recording, the heart-wrenching I Loves You Porgy from Porgy and Bess. And the show was just beginning.

Nina Simone’s skills as a pianist helped propel her journey from a North Carolina high school to the Julliard School of Music in New York City and later to an audition for the prestigious Curtis Institute where she was rejected for displaying too much emotion, stinging words of prejudice that inflicted emotional injury to the 17 year-old prodigy. Always defiant, Ms. Simone’s Young, Gifted and Black, another hit recording addresses self-confidence despite rejection and ensuing pain, and stirringly introduces a showcase of her determined plunge into music, singing and playing the blues, jazz, gospel and her signature protest songs.

The 1963 bombing of a black church that killed four girls in Birmingham, Alabama, an event that placed Ms. Simone’s voice and star power behind the civil rights movement is described in agonizing detail. The bone-chilling and very provocative Mississippi Goddam, Simone’s response to Birmingham and the murder of Medgar Evers that same year, explodes just before intermission, allowing time to catch a breath and recover some needed equilibrium. 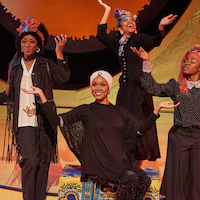 Love me or Leave Me wasn’t composed for Ms. Simone, but when she performed it at the Newport Jazz Festive with a never-to-be equaled piano solo incorporating Mozart and Bach-style counterpoint, the recording stands today as a testament of her capacity to love deeply and never forgive an injury. There is pain on the stage but there triumphant moments of joy as well. Nina Simone was a versatile, virtuoso musician, an American original and a ferociously independent woman.

Beyond the music (the band is flawless), Simply Simone makes the case for the arts in Atlanta, particularly outstanding companies like Theatrical Outfit. On this day, the audience through the auspices of song and dance visited a little girl and a magnificent woman named Nina who expanded the reach of jazz and much of popular music, never hesitating to use her voice as a vehicle for change.

The show leaves the audience dancing and clapping. Nina could express hurt, but she also knew how to stir the spirit.

Created by Robert Neblett and David Grapes, Simply Simone: The Music of Nina Simone is directed and choreographed by Patdro Harris with musical direction by Chika Ma'atunde. Through April 15, 2017 at the Balzer Theater at Herren’s. www.theatricaloutfit.org
Artwork by BreeAnne Clowdus
Photography by Christopher Bartelski
Posted by Doc Lawrence at 1:45 PM No comments:

For those looking for cultural wonders, Florida offers a trove. Art, in particular folk art, symbolically tells so much about the Sunshine State and the Deep South. Jeanine Taylor, a Miami native, was educated at FSU and transitioned from a career in education to owning and managing a successful gallery in Sanford, a lovely town not far from Orlando, but light years away when measured by quiet elegance and charm. Jeanine Taylor Folk Art Gallery occupies a beautiful 100 year-old building and is celebrating a milestone of 20 years. Works by artists who visually tell the world what Florida and the South represent are omnipresent, covering walls, filling display tables, rising from floors and hanging from above. Collectively, they become an indoor rainbow of colors with powerfully positive energy.

Paintings by Atlanta folk artist Olivia Thomason just joined the works of others in Ms. Taylor’s gallery. Some like Missionary Mary Proctor, Ab the Flagman and Eric Legee are also Ms. Thomason’s friends from her days as a gallery owner. An accomplished artist, Thomason has a display case filled with awards including Atlanta’s artist of the year and gallery of the year. Coming to Jeanine Taylor’s gallery in Sanford, she says, “is an exciting opportunity. I want to be around Florida’s authenticity and have a lifelong love of so much of its core culture including legendary authors like Marjorie Kinnan Rawlings and Zora Neale Hurston.” She added that “knowing and admiring Jeanine Taylor drew me here like a magnet.”

Jeanine Taylor says her love of the arts of the region enamored her “with southern art and culture,” leading to the successful establishment of her gallery specializing in contemporary folk art from the Deep South. Ms. Taylor garners praise from high places. GO Inflight, Air Tran’s passenger publication, selected her gallery as one of the “twenty essential galleries in the country” alongside prestigious urban galleries in New York, Miami, Los Angeles, Santa Fe and Chicago.

Ms. Thomason, in addition to her awards, has painted poet Carl Sandburg’s home, “Connemara,” a national historic shrine in Flat Rock, NC. Other notable paintings include the billboard greeting Atlanta’s Stone Mountain Park’s 8 million annual visitors. “I’ll always be at heart a country girl and my favorite paintings are based on precious memories from childhood.”

More information: www.jtfolkart.com .
Posted by Doc Lawrence at 10:27 AM No comments:

Since childhood days, I’ve known about the incident. Every word is true and remains one of the most fascinating stories I know about the Civil War and St. Patrick’s Day.

This wasn’t about battlefield courage, a strategy that resulted in a monumental victory, or a stirring, inspirational speech. No, it was about how an Irish immigrant priest acting alone on behalf of God and innocent civilians, confronted a mighty warrior, faced threats of execution squarely in the eye and peacefully won a victory that somehow escaped history books.

A native of County Cavan, Ireland, Thomas O’Reilly, appointed as pastor of Immaculate Conception Catholic Church, arrived in Atlanta in 1861. Atlanta was a strategic transportation center for the Confederacy, and in 1864, the Union army, commanded by Gen. William T. Sherman, held Atlanta under siege with intense artillery bombardment. During the horror of Sherman’s extended assault, Father O’Reilly ministered to the wounded and dying of both armies, along
with civilian casualties.

After the Battle of Atlanta, the city fell and was occupied by Sherman’s army. The decision was made to destroy Georgia’s infrastructure as part of Sherman’s well-known “March to the Sea.” Sherman issued the order for Atlanta to be burned, including all homes and churches. Enraged, O’Reilly gained an audience with Sherman at his headquarters, now the site of the Carter Center and Presidential Library.

The confrontation was unpleasant. O’Reilly, failing in his efforts to persuade Sherman to spare the city, was told by Sherman that he was pondering whether to have the priest summarily executed by firing squad. Undeterred, O’Reilly reminded Sherman that his army was substantially Irish Catholic conscripts who would likely mutiny before burning a Catholic church. O’Reilly also informed Sherman that, in the event of the destruction of churches, he would take official measures to have every Irish Catholic soldier in Sherman’s army excommunicated.

O’Reilly was not executed. Upon his death in 1872 at age 41, he was buried in the basement of his church. A few possessions are on display. His resting place, which may be viewed by appointment, has the feel of a sacred shrine. I have visited there regularly over the years.
Each year, at the end of Atlanta’s St. Patrick’s Day parade, the Hibernian Benevolent Society of Atlanta places a wreath at the memorial for Thomas O’Reilly, which stands on the corner of Atlanta’s city hall. The congregations of the churches he saved erected it long ago.

The courage and tenacity of Father Thomas O’Reilly embody the ecumenical spirit
that continues to define Atlanta an international beacon for human rights.

NOTE: This was one of Frank Spence's favorite stories, one he loved sharing with his many friends. Frank was a constant and joyous presence in Atlanta whose career included service as a high-ranking executive with both the Atlanta Braves and the Atlanta Falcons. A tireless champion for those who needed a helping hand, Frank was proud of his Irish heritage. He died in late January at Emory University Hospital and this story is dedicated to his legacy of goodness.

Posted by Doc Lawrence at 2:34 PM No comments:

An Evening At Sassy's-A Gem In a Historic Village-

STONE MOUNTAIN, GA-Sassy’s is one of those welcoming places where you want to hang out. Joan Sharpe’s highly regarded creation is housed in a stately historic building made with granite from nearby Stone Mountain. Entering on this lovely late winter evening was a step into a fairyland of happy people literally surrounded by paintings, good books, jewelry, designer dresses and most anything else that stimulates the imagination.

This was Sassy’s sneak preview, a festive celebration that included the unveiling of new paintings by the accomplished artist Joan Monroe whose works adorn a red wall in one of Sassy’s rooms. “This is art you can use,” Ms. Monroe explained, noting that the clocks with brightly colored animals represented a new challenge beyond her popular paintings on silk. “I am very pleased with the results.”

Olivia Thomason, another well-known artist, said the works by Joan Monroe reminded her of a legendary artist: “I thought of Andy Warhol and the use of colors in some of his best known works like Marilyn Monroe. I love Joan’s new works.”

The visitors browsed through the rooms examining jewelry, books, and a potpourri of interesting items including eye-catching clothing for women, costume jewelry, shelves of collectible books and a cornucopia of unusual items that would make memorable gifts. The festive atmosphere was boosted by servings of wines and sangria, a prelude to the longer and more relaxed days of springtime just ahead.

Sassy’s is impossible to miss. Located at 975 Main Street in the Historic Village of Stone Mountain, you’ll find Joan Sharpe to be the accomplished hostess who immediately makes strangers feel like close friends. The selections are vast, varied and interesting. Prices are very reasonable (I am a happy customer) and when you see that glorious red wall with the colorful works by Joan Monroe, you will want to stay a little longer.

Posted by Doc Lawrence at 7:48 AM No comments: