A LIFETIME OF LEADERSHIP

"The righteous man walks in his integrity; His children are blessed after him."
Proverbs 20:7

STONE MOUNTAIN, GA-It’s not a big day for the fresh flower industry and restaurants don’t count on massive crowds, but Father’s Day has more importance than window dressing of festivities. Not to discount tributes-they are important-but fatherhood carries many elements that merit pondering on the day set aside for remembering. 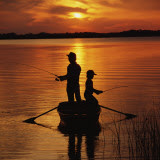 I’m the fortunate son. Dad, at 96, is, by threads, hanging on. He challenges the end by whispering that he will live until he reaches 100. Doubt him at your peril.

His youth mirrored millions of other men of the era. Leaving the farm during the depression, he came to Atlanta and was a team member at Bell Aircraft that built the legendary B-29. One became the Enola Gay. Drafted during World War II, he fought across Europe under George Patton as a foot soldier in the Third Army, later assigned to a legendary army called the Thunderbirds and mustered out while serving as an MP in New Orleans after a spell with General Jonathan Wainwright.

My mother had a boy’s army dress uniform made for me to greet him at the station when he got off the train named The Crescent in Atlanta.

He was movie star handsome.

Education and home ownership came through the GI Bill of Rights. Dad had a high opinion of FDR and Harry Truman and accomplished everything possible during my baby days. The early years were tranquil where the only interruption was his determination to get a college education which he did at night and for a while in Indiana.

Food was always on the table, we dressed well for school and church, and he only wanted one thing for his three children: a good education. We went to college where we chose and honored his wish.

He takes pride in outliving almost everyone he knew or worked with except for one overbearing tragedy: the loss of his youngest son, an event that almost did what the Nazi’s could not.

My childhood memories include many fishing trips. Carrabelle, Florida where, at about 10 miles out, I got seasick and prayed I would die. Freshwater fishing in Alabama on the Tennessee River. The pier in Lake Worth Florida. Big game fishing in the Atlantic and a boatload of trout caught on the Indian River. My preference for fresh fish has never lessened.

Baseball, whether I played or we went to see the greatest minor league team in history, the beloved Atlanta Crackers, was primary entertainment. His favorites (and mine) were Ralph “Country” Brown, a speedy centerfielder who never made it to the big leagues and Eddie Mathews who did and joined Babe Ruth as the only player to hit a home over the centerfield Magnolia tree in Atlanta’s Ponce de Leon ballpark. 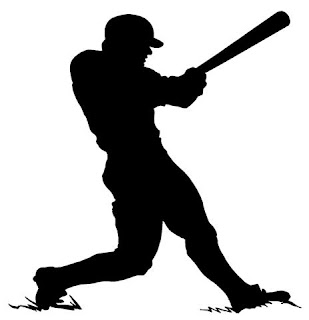 The old tree still stands and I visit it occasionally, always thinking of the farm boy who survived war, worked hard, served his community quite well and gave me a jump start in life.

We lead best by example. My father is a composite of Robert E. Lee and Billy Graham. A ferocious warrior, a Southern gentleman and devoted Christian. A good and decent man who laughs at the stories from Jerry Clower and Lewis Grizzard.

Happy Father’s Day big guy. Thanks for a wonderful life.

Posted by Doc Lawrence at 6:56 AM No comments:

Insider buzz already applauds the production as original and refreshing. Ms. Carter says that the series incorporates her desire “to show the diversity of Southern foods, and pair dishes with wine, which has not been done before.”

Georgia Public Television (GPB) in announcing the show’s premiere says that Ms. Carter is “regarded as the go-to authority on Southern entertaining,” and that “each episode features chef Lara Lyn Carter as she travels to a different locale and introduces viewers to its local fare and signature dishes.”

With her trademark enthusiasm, Lara Lyn says that Thyme for Sharing is not just a cooking show: “Food is about more than preparation and eating. When I travel, one of the first things I do is plan the food itinerary. I like the idea of exploring locations and making people feel like they’ve actually experienced a place through the food.”

In the first episode of Thyme for Sharing, host Lara Lyn Carter explores an American shrine, Thomas Jefferson’s Monticello, where wine with Southern cuisine was a regular dining experience. From Jefferson’s extensive notes, television viewers learn how America’s third president and author of the Declaration of Independence set the table and entertained guests with fresh foods from his gardens and orchards. Chef Lara Lyn then enjoys a glass of something wonderful with Gabriele Rausse, Monticello’s esteemed director of gardens and grounds and discusses Jefferson’s passion for wine. During the show, Lara Lyn resolves a historic debate: did Jefferson introduce ice cream to America? Enriched with knowledge, the show heads back to Lara Lyn’s home kitchen where she prepares an all-American dinner featuring herbed pork tenderloin, cornbread salad, and grown-up ice cream. Not surprisingly, wine that would please Thomas Jefferson is served.

Future episodes take chef Lara Lyn to Georgia’s Jekyll Island, Music City in Nashville and Gray Moss Plantation in Leslie, Georgia featuring her exploration of local fare and a return to her South Georgia home where she puts her own twist on signature dishes. In the end,  “thyme for sharing” is a well-appointed table, an exciting meal, and perfectly paired wines enjoyed with the good company of family and friends. 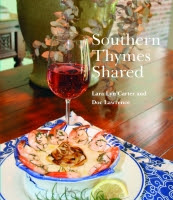 Posted by Doc Lawrence at 11:46 AM No comments: