Fans will be relieved to learn that next Sunday’s championship showdown popularly known as the Superbowl will lack the suspense of waiting for an outcome. I’ve done a survey of trusted sources and the consensus, not surprisingly, favors the Atlanta Falcons by a comfortable margin.

Coach Curley Burnell, long retired but still closely observing the game he loves, serves as a source for many sports interests who make it their business to know as much as possible about the skills and realistic potential of top teams. “I’m going with Julio Jones and Matt Ryan,” says the jovial retiree. “Having them paired with that impressive running game makes them way too formidable.”

“New England,” adds Wade Steefel, a longtime sports writer now retired in Fort Lauderdale, Florida, “is a little old now and I don’t think they can keep up with Atlanta to the end.” Steefel is a Patriots fan, but cautions that he is also “a realist.” 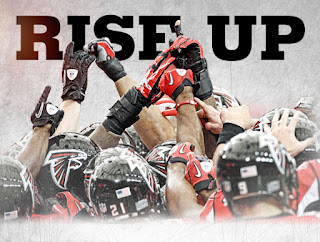 The most reliable prediction comes from Foster, my grandson, a sports fanatic and devotee of the Boston Red Sox and the Atlanta Falcons. Over the years, he’s called out the winners with eerily accurate score predictions. His crystal ball reading for next Sunday's big game: Atlanta 42, New England 33. 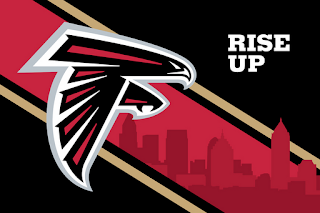 Atlanta, for all the growth and diversity, still places Southern hospitality at the top of how we welcome guests. We’re friendly & generous, always willing to provide guidance and reliable suggestions. Our town is a major arts center, unchallenged as the South’s leader and the restaurants here attract international acclaim. Before the big game is played Sunday afternoon, there’s time to really enjoy a sample of what makes Atlanta such a terrific place to visit.

Just a short distance from the Georgia Dome, the Rialto Center for the Performing Arts presents a tribute Saturday evening to Nat King Cole by Ramsay Lewis and John Pizzarella. During the day, you can visit the College Football Hall of Fame, the memorial to Dr. Martin Luther King, Jr. and tour the National Center for Human and Civil Rights. 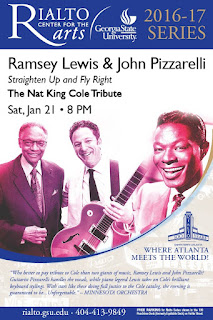 Dining choices are staggering. Go to Amazon and get your copy of Culinary Atlanta, produced by Malika Bowling our resident food authority. It’s loaded with reliable and very current descriptions of the best of the best including Ponce City Market along with hundreds of others. Ponce is a showcase of urban preservation and restoration with dozens of restaurants, shops, interesting locals; an experience you’ll take back home with pleasant memories.

Lewis Grizzard, a native son, left us in the 90’s, but Hollywood actor Bill Oberst, Jr. brilliantly revives his legacy of humor and solid Southern storytelling on the stage of Art Station Theatre, adjacent to Georgia’s top tourist attraction, Stone Mountain Park. Tickets available at www.artstation.org. A visit there includes a tour of the stunning exhibition of folk art, “My Southern Memories,” the paintings of Olivia Thomason.

“Rise Up” was introduced to the world in Dr. King’s “I Have a Dream” speech. We’ve adopted it here in many ways. One includes the cheering on our Atlanta Falcons. We invite you to join in as we chant this on Sunday afternoon before, during and after the championship game.

Posted by Doc Lawrence at 7:14 AM No comments: 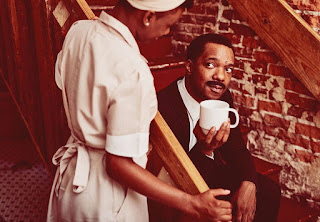 LAWRENCEVILLE, GA-The stunningly powerful production at the Aurora Theatre of Katori Hall’s The Mountaintop is set in Memphis on the final night of Dr. Martin Luther King’s life. Can a civil right’s icon accept the inevitability of his ending the next day? How far will faith carry a man about to enter the valley of the shadow? Will death’s blow be painful? Is fear fairly allowed for a man who has encouraged his followers to rise up against injustice and confront danger?

It’s the night of April 3, 1968. The stage is a duplicate of the Lorraine Motel in Memphis and the door to the balcony that will soon become the platform for Dr. King’s fatally wounded body is eerily authentic.

Prior to calling his wife in Atlanta, Dr. King searches his room for FBI surveillance bugs, and then orders coffee from room service. The maid, Camae, dutifully enters with a fresh pot. For an hour and a half, the colloquy between Camae and Dr. King covers the past and present events in King’s dangerous confrontations with established power. The future for him, however, will be witnessed from heaven, the fulfillment of his speech where he revealed his vision of the mountaintop where he saw the Promised Land.

While everyone will face death, few who are otherwise vibrant and healthy would be spared the fear of life ending. Joan of Arc in Bernard Shaw’s Saint Joan knows she will be executed but is afraid of fire. Dr. King, who is working on a speech that he will not be able to deliver, understandably wants to complete his work. But, there will be no more marches or even the opportunity for a final embrace of his wife and children. In The Mountaintop, Memphis almost becomes a version of the New Testament story of Gethsemane.

Neal Ghant’s powerful interpretation of Martin Luther King, Jr. is balanced brilliantly with the spellbinding performance of Cynthia D. Barker’s Camae. Throughout the exchanges with King, she adds extra energy and more than a little hilarity in the motel room during her first day of a new job. Both have their own mission dramatically revealed as the audience witnesses the tour de force of a journey along a preordained path.

Playwright Katori Hall presents Dr. King as a man no different than others. “The scars of his humanity,” he explains, “are what makes his achievements all the more remarkable. It lets us off the hook to deify him. There is greatness in all of us. We can carry on his dream.’

The Mountaintop is more than a masterful blending of acting, direction and production. It takes the bloodstained baton of the unfinished struggle for justice, dropping it on the battleground. We are free to embrace it and make it our own if we dare assume the risk.

ATLANTA-I saw him perform twice, both times just before he took off like a Rocket 88. On one fine day before his show in Atlanta’s Fabulous Fox Theatre, I actually met Elvis in the lobby of the regal Georgian Terrace Hotel as he was talking to the most beautiful girl I ever saw. Very approachable and friendly, Elvis asked me my name and introduced me to his friend, Carole Joyner, who I later learned was part of the duo that composed a mega-hit, “Young Love.”

When I heard his sing “Mystery Train,” and “Baby Let’s Play House,” I proudly admit that I lost my innocence. Paul McCartney, John Lennon and Bob Dylan pretty much said that Elvis had this same effect on them.  I still believe that Elvis, Johnny Cash, Carl Perkins, Hank Williams and Merle Haggard came in on a spaceship, did their duty magnificently, and returned to their home in a faraway paradise.

My image of Elvis is frozen into those moments just before fame and fortune: A supremely gifted young man blessed with Hollywood good looks who, on stage, electrified an audience. It was totally unimportant that some thought he was too sexy. I wanted him to be wilder and more uncontrolled.

Elvis was a music man. His early recordings on Sun Records have, in my opinion, no genuine counterpart. The songs are real, rugged and raw and oh, so Southern.

Along with millions of fans, I understood then and now the power of rock and roll. For those baby days of unbridled joy, I feel a debt to Elvis. He didn’t invent rock, but he sure brought in into my Atlanta home before I could drive a car, join the army or vote.

Happy Birthday to the King.
Posted by Doc Lawrence at 11:34 AM No comments:


STONE MOUNTAIN, GA-The grand Southern humor writer would be 70. After his death in 1994, few newspapers have humor columns. The exception would be the splendid Miami Herald with Carl Hiassen and Dave Barry. For a few years, we had Georgia’s homegrown Lewis Grizzard, who had readers and live audiences howling with laughter as he told good stories, pausing occasionally to stick a hairpin in a bloated politician. Lewis was irreverent, loaded with one-liners, a worthy descendant of Southern humorists like Brother Dave Gardner.

Bill Oberst, Jr., the distinguished Hollywood actor, has taken the role of Lewis Grizzard to the live stage for two decades with performances throughout the country and here at the Fabulous Fox Theatre and Art Station, the cultural treasure in
Historic Stone Mountain Village. The South Carolina native reprises his stage performance as Lewis, “In His Own Words,” on January 21, 22 and 23 at Art Station.

Lewis Grizzard literally took fried green tomatoes to another level after the hit movie of the same name, declaring in a column that the best tasting version was served at Blue Willow Inn in Social Circle, Georgia. Almost instantly, the number of diners expanded exponentially. Ever provocative, he advised his audience to avoid eating barbecue in North Carolina, described Clemson as Auburn with a lake and tormented the wonderful girls of Alabama with stories about beehive hairdos.

Bill Oberst’s portrayal conveys Grizzard’s deep loyalty to the University of Georgia, Lewis’ alma mater, the Atlanta Braves and most things Southern. For those who relocated to Atlanta and gratuitously complained that things were better in cities they hailed from, particularly Chicago, he advised, “Delta is ready when you are.”

Lewis often said that “there is no such thing as being too Southern,” and that the only way Coca-Cola could be improved is to “put rum or bourbon in it.” One of Lewis top tales was Sherman’s unsuccessful attempt to remove a Confederate soldier positioned high up on Stone Mountain.

Bill Oberst, Jr. will take you back to those halcyon days when we opened the newspaper at first light to the column that made us laugh, often at ourselves.

Humor is in the DNA of Southern daughters and sons. Lewis will help cure those winter blues. Count on it.