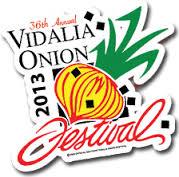 VIDALIA, Georgia— The great journalist Lewis Grizzard described the area as Georgia’s big sky country. In Vidalia, visitors behold a glorious horizon, a stunning panorama of natural beauty. A case can be made that all good plants will grow well in the fertile soil in this Deep South nook with the world famous name. Water is abundant and the clean air and moderate climate supports a comfortable lifestyle. But the magnet that attracts visitors is now and forevermore the great sweet Vidalia onion, arguably the world’s most talked about vegetable.

The Vidalia Onion Festival just concluded. Food tourism is a fast growing industry, a fact not lost on Ingrid Varn the high energy Executive Director of the Vidalia Area Convention and Visitors Bureau: “The economic impact each year is about $850,000.  The festival is huge pull for our region.  It is a way for us to showcase our small town.  We are unique because we are a nationally known brand but still a small city of about 12,000 citizens.”

Vidalia onions have high profile fans like acclaimed chefs Emeril Lagasse and Georgia native Paula Deen, but also include fast rising star TV chef Lara Lyn Carter of WALB-TV in Albany, Georgia. “We had an onion-farmer from Uruguay visit last year,” said Ms. Varn, “who read about the museum and stopped by on his annual trip to Miami.  We have also had a group from Kazakhstan on an agricultural tour.  The kids seem to love the interactive onion grader in the children's room.  It allows them to see how the onions are graded by different sizes.” Ms. Carter says she used the legendary onion in countless dishes. “Vidalia’s are as basic to me as salt and pepper.”

The festival anticipates the harvest of Vidalia onions and the introduction to the national marketplace and this year featured the second Vidalia Onion Cook off, a competition among top Georgia chefs for cash prizes, trophies and bragging rights. First place honors were awarded to Chef Daniel Chance, executive chef of Campagnolo Restaurant and Bar in Atlanta for his recipe, “Scallop Stuffed Vidalia with Onion Purée.”

Good soil, pure water, fresh air and friendly people seem to be somehow embedded in the Vidalia onion, Georgia’s official state vegetable. This is a destination for travelers most any time of the year, who, according to Ingrid Varn, “need to come to Vidalia to experience the whole onion.”

NOTE: Wonderful recipes incorporating Georgia’s legendary onion are legion, but nothing beats authenticity. A genuine Georgia Girl, Lara Lyn Carter knows her way around a Southern kitchen. Here’s one of her original recipes:

Posted by Doc Lawrence at 6:57 AM No comments:

“You are my life, the fate of destiny,
in the destiny of abandonment.
Still the same as yesterday,
I am just the same.”
Bamboleo-The Gipsy Kings 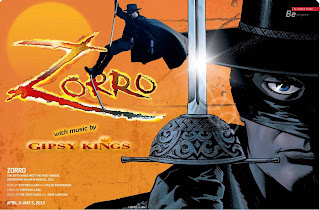 ATLANTA-Music and dance inspire rejuvenation of a sagging spirit. When Gypsies perform Flamenco, there is something that connects with an ancient flame still burning deep inside our mortal souls. Zorro, the outstanding musical at the Alliance Theatre, proved to be the equal of Frida and Diego, the art exhibit extravaganza drawing record crowds next door at the High Museum. Zorro, with it’s entertaining rythyms and harmonies, is another reminder that Atlanta is indeed an international city where risk and adventure in the arts community comes as easy as a Sunday morning..

With music by the legendary Gipsy Kings, and a cast of Flamenco dancers performing at a breathtaking pace, there was no risk of the audience being disinterested. Zorro is “the fox,” a clever masked hero rescuring his family and community after returning from military academy in Madrd to early Spanish colonial California, bringing along a band of Gypsy friends. Through song and dance, we are led to the spectacular finale with the masked hero swooping over the audience to reclaim justice and procalim love. The celebration features Flamenco dancing and songs accompanied by amazing percussion and instruments. 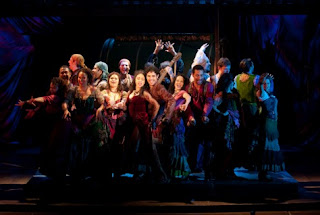 Zorro is billed as the first Flamenco musical. The cultural connections embrace the music, song and dance of Andulsia in southern Spain, paying homage to the Romany people, popularly known as Gypsies. The blend of Romany, Spanish and Arab cultures is there, but the speed of the musical allows no time for analysis: you just give in to the irrestible embrace of sights and sounds.

Fueled by Flamenco and balanced by amazing choreography, the feet pound out the Gypsy beat while the skirts fly around swirling dancers. Zorro incorporates over 50 actors, dancers and musicians building to a full-cast crescendo with “Bamboleo.”
Zorro celebrates the heroic tradition. The musical brings the magic of Gypsy culture to the Deep South on our most heralded stage. See it to honor love through music and dance. And bring friends and family.

Posted by Doc Lawrence at 7:18 AM No comments:

BASEBALL AND THE BRAVES

ATLANTA’S BOYS OF SUMMER
BEGIN WITH A BANG

“Baseball, it is said, is only a game. True. And the Grand Canyon is only a hole in Arizona.”
George Will 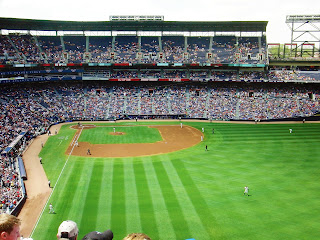 ATLANTA-The day was made for tourism officials. 100,000 in town for basketball’s “Final Four” and the Braves playing the Cubs under a clear blue sky at Turner Field before a sellout crowd. After the game Sting and Dave Mathews were performing live and free in Centennial Olympic Park. Few stayed home on this lovely spring day in Dixie.

Enjoying the game with me were folks from Michigan, Kentucky, Kansas and Florida, here for baseball and basketball. Baseball fans are a gentler lot, minus most of the bluster and bravado and all too often vulgarity of college and NFL football games. I take small children to Braves games and would never think of taking them to any football games other than high school contests. Baseball enriches our higher instincts.

With young families doing the Tomahawk Chop and Chant (a Braves tradition began in the early 1990’s by Dieon Sanders during his tenure as a Braves outfielder), veteran pitcher Tim Hudson was in near perfect form. Braves newcomers the Upton brothers continued to shine and struggling second baseman Dan Uggla showed signs of new life with a towering homer.


﻿ ﻿I always arrive early on game day because tailgaters-the Braves are as much a part of tailgating in these parts as Saturday college football-and photo ops are priceless. As always, some outdoor tables were beautifully set with wine glasses waiting for pours of quality vino and grills sizzled with chicken, catfish and steak. This crisp and dry day begged for a tasty Bloody Mary.

The Clydesdale horses and wagon from Anheuser Busch were outside the stadium complete with a Dalmatian atop the wagon. What a wonderful greeting as fans entered the game confines.

The chanting and chopping paid off. As Skip Carey, the late voice of the Braves proclaimed: “Braves Win! Braves Win!”

﻿﻿﻿﻿﻿﻿Baseball fits life’s rhythms. There will be victories and losses. Tomorrow is always a clean slate. There are surprises and disappointments. But until that final day in October when the last out is called in the 9th inning, there’s hope.

Hope is a dream, Elvis said, powered by a V-8 engine.

Going to The Masters? Meet me in Aiken, SC:
http://mycookingmagazine.com/gourmet-highway-jazz-southern-hospitality-and-racing-horses/

Posted by Doc Lawrence at 11:31 AM No comments: