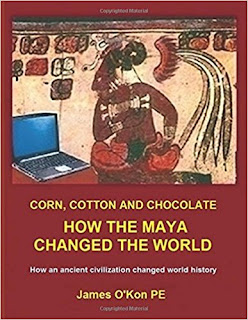 Atlanta-based Jim O'Kon's, Corn, Cotton and Chocolate: How the Maya Changed the World, is far more than a history book. It is readable, stimulating and each page seems to spring surprises. O'Kon, a professional engineer with a developed specialty as an archaeoengineer has investigated over 50 Maya sites. Vanilla, chocolate, corn, peanuts, cotton and pineapples are just a few of the Maya contributions from what O'Kon calls "the greatest agronomists in world history."

The book reveals that the Maya were the longest-lived civilization in history, beginning in 2500 BC on a time-line with the ancient Sumerians and terminating in 900 AD during the reign of Charlemagne. Their histories did not converge because the Maya and other world civilizations did not know of each other’s existence. The author describes the Maya as "the phantoms of history. They were the greatest agronomists in world history. Their cultivars nourished the Maya culture and enabled their rapid growth into a society of profound thinkers. After European contact, the inventive products of Maya agronomy were disseminated around the world."

The integration of Maya cultivars into world cultures, observes the author, has changed the course of world history. "Maya science has changed the world. Maya Cultivars now feed and clothe the majority of the world’s population. They have increased the global population, started wars, overthrown monarchies, ignited the industrial revolution, initiated educational systems, started sports empires, changed the lifestyles of world cultures and have killed more people than all the wars in history. It will come as a surprise that history can be changed by a civilization that collapsed over a thousand years ago. Maya cultivars are living inventions that have become a part of the world's heritage and continue to make history."

For 300-plus pages, readers visit an advanced civilization, left wondering what our daily lives would be without their accomplishments. Their civilization destroyed itself through over-stripping the land, leaving them vulnerable to environmental changes. Our world, advises Jim O'Kon, should adopt a philosophical principle of the Maya: Remember the future to anticipate the past. As the future looms, Maya cultivars are still changelings in world affairs. Our future depends on a balance of the world's population and food supply.

Jim O'Kon is an optimist. His wonderful book is instructive and entertaining.

Posted by Doc Lawrence at 11:29 AM No comments:

After  a concert at Emory University years ago, Wyntonn Marsalis offered his interpretation of the blues, observing that it is a way to defy hardship and hopelessness through the power of music. “The blues,” he said, “helps you to never give in.” Horizon Theatre’s Blackberry Daze is more than a romantic journey into the heart of the South: it is a blues and jazz musical play propelled by powerful energy rarely seen on any stage south of Broadway. 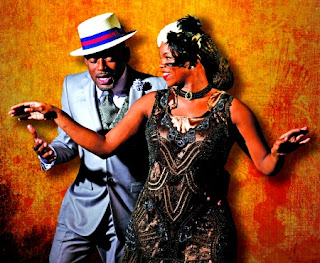 With a soulful, original music by William Knowles, this musical features 14 storytelling songs, presented in 1920 rural Virginia, displaying the challenges of three Black women, who are either married to, loved or betrayed by a hard-drinking, gambling dandy Herman Camm, portrayed brilliantly by TC Carson who seems created for this role.
The story is tangled web built around Camm’s deceit while showing him to be, no matter how evil, almost irresistible except when he does the unthinkable to his step-daughter. Still, Camm, described in one unforgettable line as the type of man who was “cockle-doodle-doodling in a whole lot of hen houses,” makes the show, always dapper, looking like a version of Cab Callaway, singing, dancing, prancing his way into the hearts and beds of the many women he takes a shine to.

Sultry songs like “Layin’ It Down” evoke classic music in Porgy and Bess, but are at the same time contemporary, particularly with the outstanding accompaniment of pianist S. Renee Clark and virtuoso guitarist Spencer Bean. The dancing is flawless, the jazz simmers and the blues remain defiant.

Blackberry Daze is playing in the perfect city. Atlanta has a rich history of blues, gospel and jazz. Horizon Theatre’s production absorbs and skillfully interprets this heritage that is as enjoyable today as it was during the night club heydays along Sweet Auburn. An important part of Horizon’s New South Play Festival, it showcases the extraordinary talents of two Atlanta-based writer/creators Ruth P. Watson and Thomas W. Jones II.

The set design deserves praise for authenticity. You cannot overlook the remarkable period costumes. The music is flawlessly delivered.

If you like your musicals served up with spirit and high energy, Blackberry Daze will satisfy you. It shakes and rattles for almost two magnificent hours.

Posted by Doc Lawrence at 5:41 AM No comments:

Fire on The Fourth-A Summer Soiree

They gathered in the greater Stone Mountain community just outside Atlanta, bringing gifts of smiles, embraces, barbecue, fresh vegetable sides, tequila, bourbon, beer and wine. From Florida, Tennessee, Illinois, Georgia and other far away places, the assemblage included musicians-pickers, drummers and singers-doing their interpretations of Van Morrison, Allman Brothers, Hank, Willie, Merle, The Band, Bob Marley and more from the late afternoon until well beyond the midnight hour.

No nightclub or honky tonk could celebrate America better. These guys were special and this part of North Georgia rocked.

The home and yard is "my spiritual garden," said host Franki Jewell, referring to myths and fables. Magic abounds here, she revealed. The positive kind that enriches mind and body.

The party was in keeping with traditions that George Washington and other Founding Fathers encouraged. Our first president, while commanding the revolutionary army, provided extra rations of rum on July 4 at his expense to his soldiers. John Adams encouraged commemoration with "pomp and parade, guns and bonfires forever more." 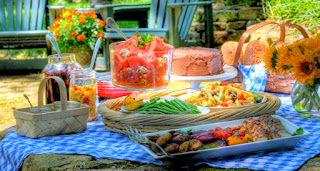 In that spirit, Americans, in their own way, privately and publicly celebrated the date America was born with races, fireworks shows, concerts, parades and events draped in red, white and blue. 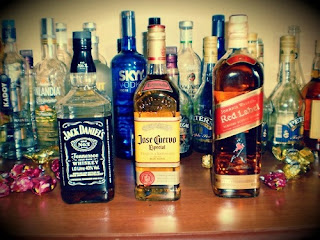 Posted by Doc Lawrence at 10:26 AM No comments: