Praise the Lord I saw the light.
Hank Williams

ATLANTA-I met Rita Wood at the end of a rousing rendition of the Hank Williams song, “I Saw the Light,” by a talented blues singer. She was taking a break from greeting potential buyers at her family’s exhibition at Folk Fest, the largest folk art show in the country, held for the past 20 years just outside Atlanta. “I play fiddle,” Rita told me, “and my husband’s quite an artist.”

I walked over to the Dawg’s Art booth, one of about 100 at the three-day show, and met James “Dawg” Wood who introduced me to his art and told me his story. The revelations were similar to those self-taught artisans I know and have been writing about for many years. The common threads tend to be home, land, family, community and humor. Dawg’s works, displayed for the crowds packed into the exhibition hall, told a visual story about life and heritage in the Blue Ridge Mountains of North Carolina, supplemented by Rita’s revelations about weekly jams at the Phipps Country Store.

Do they dance? “It’s flat-foot,” replied Dawg who demonstrated the ancient steps, confirming that I had seen this performed a few years back in Galax, Virginia.

Dawg has enjoyed some success that eludes many folk artists, having won the admiration of Atlanta-headquartered Coca-Cola Company with one of his paintings that had an image of an old Coke machine, a bit of nostalgia that turned into a profit and some notoriety for the resident of Lansing, North Carolina.

Folk Fest draws visitors from museum curators and art collectors to people who love the color and authenticity of what I call Americana. Officials from the Smithsonian, the American Museum of Folk Art, colleges and universities hobnob with folks who search for that painting or wood carving to brighten up a dull room. The rich and famous stand beside children from rural areas; housewives take a weekend off to look for a hand-crated ceramic angel to put on a mantel. Art and democracy blend seamlessly.

After taking some photos, I said goodbye to everyone, promising to visit Lansing and Ashe County soon. “David Holt is a friend,” Rita said, “and he’s stayed with us at our home.” Holt, a Grammy Award winner and the longtime host of Public Radio’s “Riverwalk Jazz” is a man I admire and knew someday I would indeed make the trip north, driving on roads near the course of the New River in time for a jam at the Phipps Country Store.

Missionary Mary Proctor lives in Tallahassee and has connections with a higher power that few enjoy. Tragedy like the loss of her son never deterred her deep beliefs and contagious optimism. Life goes on, there’s a better world waiting and look on the sunnyside are prevalent themes. I have her works on my walls at home and a favorite shows a woman dancing, holding some daffodils, inscribed with: “Blessed are the hands that giveth flowers.”

No artist does Biblical scenes like the great Lorenzo Scott, a master whose works are in museums from Atlanta’s High Museum of Art to the Smithsonian. Eric Legee still paints on found wood in his Blue Ridge mountain home in rural Rabun County, Georgia, and his themes range from the Dalai Lama to blues legend Robert Johnson. Braselton, Georgia’s Chris Hobe produces what he calls ”revolt art,” a populist expression of current events. When you see it, stops you in your tracks. Precise, detailed and provocative, it’s subject to multiple interpretations like many works by classic artists.

The year is nearing the end of the third season and late summer is a perfect time for Folk Fest: Heat and humidity, endless rain, old friends, the joy of being in the same room and breathing the same air with children, old men, couples holding hands and unconsciously doing some toe-tapping to live music is the perfect backdrop for this edition of Folk Fest.

As Missionary Mary Proctor says, “to be happier, you have to be in heaven.”

Posted by Doc Lawrence at 5:47 AM No comments:

BEHIND THE RED DOOR 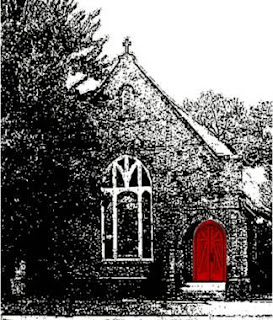 UNION SPRINGS, Alabama-The arts in this Deep South state seem to aspire to be on equal footing with college football. When traveling in Alabama, I've beheld a rich tradition of writing, acting, music and dance along with other impressive examples of visual and performing arts. This beautiful community near Montgomery, home to the Red Door Theatre, has earned the right to be known as a performing arts destination, a worthy place for travelers to enjoy the miracles from the live stage.

The Red Door’s most recent production, See Rock City is both a play and the iconic name introduced to the world by a sign painter named Clark Byers, who painted “See Rock City” on the roofs of barns as far north as Michigan and as far west as Texas.  The play is concerned with the small events and the major blows that befall a young couple in the first year of their marriage. The story is gentle and not lengthy but deeply focused on the cares and concerns of a family dealing with the joys and limitations of their lives as best they can while taking pleasure in small things. This quiet masterpiece confirms Arlene Hutton as a playwright to be reckoned with. 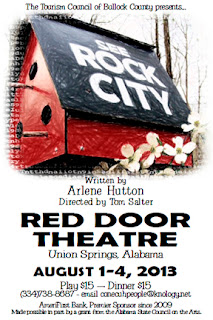 Do you have to move to find happiness? Is there contentment through acceptance? Taken together, these suggest an exploration of that universal query: How deep is your love? See Rock City, set in the last days of WWII, is an Appalachian tale loaded with challenging and relevant issues that stick with you.

The Red Door Theatre is located in what once was an Episcopal church. Most everything regarding the original from the exterior, the stained glass and stage remain. Actors and sets have replaced preachers and pulpits. Some very creative locals have made it into a fine example of restoration and preservation, a warm place to connect souls with the magic of an entertaining production.

Union Springs and the Red Door Theatre offer an enchanting opportunity to experience a small Southern town while taking in a professional theatrical performance. The productions offer audiences the opportunity to enjoy the wonders from the live stage in an intimate 160-seat venue. And, there’s a big bonus: Union Springs is well known for its beautiful countryside and many stately antebellum homes and historic buildings.

Close your eyes and listen. You might hear Atticus and Scout talking.

Posted by Doc Lawrence at 9:07 AM No comments:

ATLANTA-This weekend is the 20th edition of the most colorful, family friendly art extravaganza in America. My first visit to Folk Fest got me hooked on the magic that comes from talking to artists and gallery owners about the paintings, wood carvings, face jugs, painted walking canes and objects that defy description. Here, in a large auditorium ordinarily used for trade shows, self-taught, outsider artists gather for three glorious days of pure joy and I wouldn’t miss it for the world.

Folk Fest provided the opportunity for me to meet Reverend Howard Finster, the sage of Summerville, Georgia who painted according to God’s instructions. The great Myrtice West began painting scenes based on the Book of Revelations after her daughter was murdered. O. L. Samuels, once a prizefighter from rural South Georgia, said he could walk through the woods and certain sticks and fallen limbs would “talk," He took them home, carved images with a knife and painted what he heard. Each of them (and many more) have their works in the Smithsonian.

The brainchild of a delightful couple, Amy and Steve Slotin, Folk Fest has grown in size and reputation. Many of the artists are from highly inaccessible parts of the rural South. Their art is inspired by spirits and an environment most would never experience. In other words, the homogenization of their culture hasn’t happened, but many are on up in the years and their talents likely will pass away as they leave this planet. America and in particular the Deep South will be the lesser.

Parking is free. Food and beverages are available from several vendors, the facility is very comfortable and you’ll be hard pressed to find anything other than smiling faces and interesting conversation.

Collecting folk art is an adventure that can be a profitable. I have early works of several notables like Ms. West, Reverend Finster and Lorenzo Scott, which have appreciated exponentially. I will never sell them because I love how I feel when I’m working with these mounted on my walls.

Come on over to Folk Fest beginning Friday evening. Meet many of the greatest of all artists, listen to the blues and let the kids enjoy themselves. There is no other experience like it.

I’ll be there, meeting old friends, making some new ones.

For directions and more information, go to www.slotinfolkart.com .
Posted by Doc Lawrence at 5:35 AM No comments: 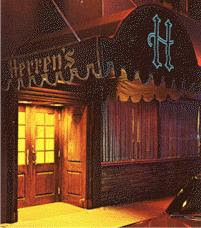 ATLANTA-The call from a big media editor triggered memories of delicious meals, gregarious hosts and terrifically interesting venues. “What do you remember about Atlanta’s older restaurants? Were any in Atlanta truly distinctive?” she asked. I remembered enough to start a conversation and even surprised myself that some were still around. The idea was to produce a retrospective: Good places to dine in an earlier version of Atlanta, making the case that the city has a rich dining background long before today’s boom with the revolving door of restaurant openings and closings.

Mary Mac’s Tea Room is still serving to packed houses with a clientele that on occasion includes Jimmy Carter and the Dalai Lama. The Colonnade on Cheshire Bridge holds strong with roots going back several generations. And Petite Auberge near Emory University is still serving French and German cuisine, adding performances by the Capital City Opera Company each month

But who remembers Dale’s Cellar, a first-rate gourmet restaurant in the basement of the Imperial Hotel? The Paradise Room in the state-owned Henry Grady Hotel. Jim Sanders’ Top of Peachtree? Leb's, Herren’s, Emile’s, or Ship Ahoy, all within two blocks of the Rialto and the Balzar Theatre? I can almost taste the chicken pot pie at Rich’s  Magnolia Room, which featured a Nathalie Dupree-inspired menu. 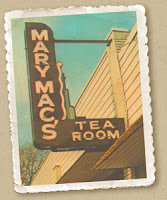 The Coach and Six was always packed and you could eat your weight in broiled lobster tails at The Crossroads in Midtown. Downtown had standard bearers like The Diplomat, a true supper club. The 70’s were the heyday of Joe Dale’s Cajun House. Sorrento’s served Italian cuisine with live Atlanta jazz by the legendary Roy Mays and the All Stars. Harry’s Steakhouse on Spring Street was just around the corner from Johnny Reb’s.

Black-owned restaurants were wonderful and thrived even during the sad days of racial segregation. Paschal’s and Shepherd’s come to mind, but there were many others.

These restaurants were almost exclusively locally owned and words like fresh or local sourced weren’t needed. Customers assumed this. 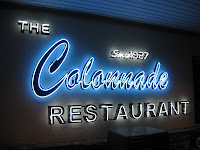 My memory has its limits. Many recall places where families enjoyed Sunday dinners, birthday and anniversary celebrations or a good place to have a meal with cocktails and wines. Share these recollections and I’ll use them. Photographs and old menus are invaluable. I have several and the prices for entrees are a far cry from today’s 40 bucks for previously frozen salmon served with mysterious lines of liquids.

This will be the major part of a feature story with television on the horizon. Join the fun with your memories, menus and photos.

Doc Lawrence: editors@docsnews.com .
Posted by Doc Lawrence at 9:48 AM 1 comment: