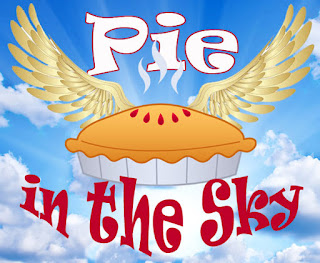 The stage as a teaching vehicle dates as far back to ancient Greece as playwrights have plucked the family tree for comedy and tragedy. Early Christians used it to spread the Gospel by portraying the sacred stories in Greek amphitheaters. Much of what we know about each other and different cultures is owed to theater. Comedy is the kissing cousin of drama. Pie in the Sky, Art Station’s world premiere production once again makes the case that the arts-inexplicably always under threat-is the core of a civilized society. Diminish the arts even slightly and norms of civility decline.

Where else but the live stage can you examine the complexity of a family while baking a fresh apple pie?

Lawrence Thelen’s Pie In The Sky is a comedy about what happens when the “nesting instinct” is applied to the end of one’s life. Dory, brilliantly performed by Karen Howell lives with her mother Margaret, hilariously portrayed by Barbara Bradshaw. Both are widows sharing a modest home in Abilene, Texas. It’s Dory’s birthday and Mama arises at 4:10 am to start the process of making her recipe apple pie, her gift for Dory. Mama is noisy and very funny.

Dory wakes up and helps Mama, who has her own ways of using ingredients and kitchen implements. At times, there isn’t room for two cooks in the small kitchen. Through razor sharp lines, humor intensifies but is never cruel.

Mother (85) and daughter (65) are widows. Aging and the specter of limited days ahead is a backdrop. There are some family secrets and as the clock (and the oven timer) wind down, the opportunity for transparency is at hand.

Pie in the Sky is the anthesisis of those silly productions commonly named Della. Comedy-the real deal-is challenging and falls flat absent imaginative, creative writing and advanced acting. Thelen’s script as interpreted by these two gifted stage veterans pulls the audience into the kitchen. We revisit our mothers for a few precious moments, remembering that while they were set in their ways, they loved us and made few if any excuses for their slips along the way. They taught us how to be human.

Pie in the Sky is tightly directed by David Thomas, one of the real giants of theater in Georgia. Chad Fenimore’s stage management allowed the genuine aroma of a pie baking in the oven to waft around the audience, leaving them fully entertained, yearning for a slice of homemade apple pie.

Good triumphs over evil. It’s a story you look for and one just manifested in the historic Village of Stone Mountain, the lovely town beside the mighty granite monolith in one of the country’s most visited parks.

Mindless vandals defaced a magnificent mural hovering protectively above the lovely town since its dedication in late summer of 2012. Yes, the filth and venom painted over the positive images of the city, its churches, cemetery, theater, ancient homes and memorials at first served the intended purpose: revulsion, sadness and deeply felt outrage. There were two choices: paint over the mural and hide the destruction, or, restore it.

One choice would obviously award evil a trophy.

The mural rests along a large wall of a pavilion on one of the most magnificent tracts of greenspace anywhere. The facility and land is owned and maintained by Stone Mountain First Baptist Church, one of Georgia’s oldest congregations. Over the years, the pavilion has hosted dinners, Christmas pageants, free movies for the public and will again be the site of a giant Easter egg hunt for children. The mural chronicles the city’s heritage and is a testament to the power of community.

The idea for the mural originated with two local leaders who engaged Georgia artist Olivia Thomason, also a city resident, to lead and design the project. Over a period of sweltering summer weeks the mural took shape, with initial painting done by school children throughout the Atlanta region, local citizens, church members with Ms. Thomason always helping and working, often on a scaffold with paints and brushes at her side.

The entire project was a volunteer effort.

The finished mural incorporated the profound humanity of the village. “The painting,” said Ms. Thomason, “was a gift to the city.” In 2012, on a brilliant late summer Sunday, the mural was dedicated with dinner on the grounds, choir music and a speech and prayer by Dr. Dan Parker, an author, revered Baptist minister and close friend of Ms. Thomason. The diverse audience exemplified the majesty of inclusion. Frank Spence, a retired PR executive with the Atlanta Braves and the Atlanta Falcons attended and remembered the mural and dedication ceremony “as the South at its very best.”

Five years after the dedication, on an early spring day in the Deep South, evil struck out. Sadly, the dark forces will be back somewhere, tossing bricks into a storefront window or a windshield, breaking into homes or desecrating a cemetery. But these good citizens demonstrated how to combat vandalism. You never allow a travesty to prevail. Doing nothing fertilizes evil.

The mural looks even better. A sweet victory.