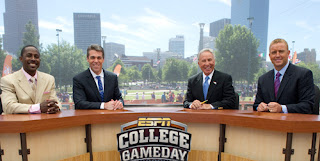 This is planet earth’s Bourbon headquarters, the home of the classic cocktail, the Old Fashioned. Bourbon is to Louisville as Coca-Cola is to Atlanta.

The show, a derivative of the tailgating culture, is almost totally festive and is wildly popular with local fans and a huge national TV audience.

College GameDay will have a celebrity guest with ties to Louisville to help pick the winners of the Saturday main events on the college football menu. The list of possibilities is endless. ABC’s Diane Sawyer, Hollywood’s George Clooney and Jennifer Lawrence and NFL Hall of Fame great Paul Hornung are just a few with stellar Louisville credentials.

Bourbon Bar: The Haymarket Whiskey Bar has hundreds of choices. Owner Matthew Landen is a nationally recognized Bourbon wizard. Best bar atmosphere this side of the French Quarter.

No tour of Louisville is complete without a copy of The Bourbon Tasting Notebook by Susan Reigler and Michael Veach..

Posted by Doc Lawrence at 12:49 PM No comments:

“The street’s a little kinder, when you’re home.”


~Benny to Nina from In the Heights 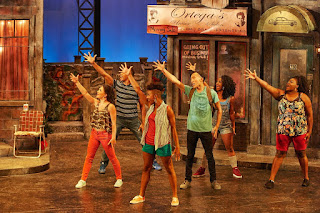 ATLANTA-Hope is the theme for Theatrical Outfit this season. Tom Key, the founder and artistic director said that when he heard the brilliant cast of In the Heights  sing “Alabanzia,” (lift all things, even this thing to God’s face) he was overwhelmed with tears of hope.

From its inception Theatrical Outfit has nurtured our conscious, prompting examination and introspection while honoring institutions like family and home. The stage is a vehicle in the global community and the current production of In the Heights, transported a packed audience from Atlanta to the community near New York City’s George Washington Bridge. The dancing, singing and music became a cultural bridge from the Dominican Republic to urban America.

We’ve changed as a people since the days depicted in West Side Story. The music and lyrics by wunderkind Lin-Manuel Miranda (Hamilton) serves as an exuberant big city production celebrating street life as he lived it and the people who built their stores and their lives in his neighborhood.

While the story is about a New York City community, there is local significance. The staff of In the Heights from director Justin Anderson on down to cast members illustrates something Tom Key told me 10 years ago. Atlanta, as the credits confirm, is loaded with great talent and this reservoir is going to get deeper and richer.

Ricardo Aponte’s dazzling choreography alternates the major on stage moments with an ebb and flow like sophisticated ocean waves. The cast is exceptional and the Rialto Center is large enough to embrace the magnificent set and project all the action.

Atlanta’s diverse neighborhoods now have different people who speak many languages. These are components of a strong community and In the Heights serves to entertain and introduce us. Everything comes together, making you very proud to live in Atlanta, a region where the future of the arts is very bright.

In the Heights received four Tony Awards including Best Musical.