GONE WITH THE WIND TRAIL DEBUTS 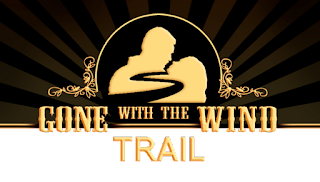 ATLANTA - The first and only Gone With the Wind Trail is up and running in and around Atlanta with prominent stops along the way allowing visitors from the four corners to explore the home and literary setting of the classic book and beloved movie. The importance of the heralded trail to those searching for signs of Rhett, Scarlett, Melanie and Ashley is underscored by access to well-curated museums, acclaimed collections and exhibitions and highly popular parks all connected by history and colorful folklore.

Several stops encourage research not available in other Southern cities. And in between destinations, visitors will find some of the best shopping and finest restaurants in the country.

The sights and sounds of Atlanta during the Civil War and Reconstruction are “told” through the eyes of Scarlett O'Hara and Rhett Butler at Scarlett on the Square in the lovely city of Marietta just north of Atlanta. The Margaret Mitchell House facing Atlanta’s Peachtree Street is where Ms. Mitchell, a Pulitzer Prize winner, wrote her novel containing the much-quoted phrase, "Tomorrow is another day". Margaret Mitchell, who died as a result of injuries suffered when struck by a taxi on her beloved Peachtree Street, is buried in hauntingly beautiful Oakland Cemetery, a stone’s throw from the Atlanta Cyclorama depicting the July 1864.Battle of Atlanta.

The Road to Tara Museum in Jonesboro south of Atlanta is an important destination on the trail and is near the site of Tara, Scarlett’s plantation home.

The Trail directs visitors to The Atlanta Fulton County Public Library housing one of the most extensive collections of Margaret Mitchell's photographs, books and personal items, along with her Remington typewriter.

The Atlanta History Center located in fashionable Buckhead is near top-rated restaurants and easily fills a day for visitors eager to learn more about Margaret Mitchell, the romantic characters she created and the tumultuous events during and after the Civil War. Other nearby attractions on or near the trail include the Kennesaw Mountain National Battlefield Park, Decatur’s Mary Gay House (Ms. Gay’s book, Life in Dixie During the War, was a guidepost for Ms. Mitchell’s historical references) and Stone Mountain Park, a spectacular family friendly facility with a museum, campgrounds, hiking trails and other outdoor recreation, historic mansions and the carving of Confederate leaders Jefferson Davis, Robert E. Lee and Stonewall Jackson.

After a few exciting days in Atlanta, consider a drive along East Tennessee’s Moonshine Trail. Vacation details at http://www.winesdownsouth.com/dine_with_doc/Dining_W_Davy_Crockett/Dining_in_TN.pdf

Posted by Doc Lawrence at 6:10 AM No comments: 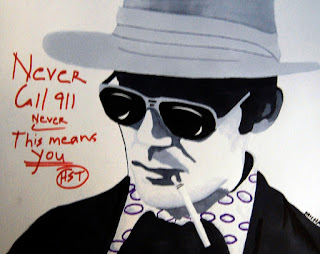 He was born in Louisville Kentucky on this day in 1937. I still miss the guy years after he “checked out” at his Colorado compound.  I have the memorial edition of the Rolling Stanes tribute edition framed, prominently displayed on a wall near the keyboard as a daily kick in the pants reminder of what a journalist can and should do in today’s world where nitwits discuss government, the economy, lifestyles and sports. Thompson would have these bottom feeders with his morning Wheaties.  The pioneer of  "gonzo journalism," where, according to Garrison Keillor, the journalist “usually ends up being part of the story he's researching, and the story is told through his eyes. There's usually profanity, sarcasm, and exaggeration so that the line between journalism and fiction becomes blurred.”  Thompson, in a Rolling Stone interview admitted as much: "If I'd written the truth I knew for the past 10 years, about 600 people — including me — would be rotting in prison cells from Rio to Seattle today. Absolute truth is a very rare and dangerous commodity in the context of professional journalism."

Hunter S. Thompson was irreverent, ferociously independent, outrageous, insightful, hilarious and disarmingly honest. His defects were front and center in all I’ve ever read by him. He remains supremely quotable: “I hate to advocate drugs, alcohol, violence or insanity to anyone, but they’ve always worked for me.” In Fear and Loathing in Las Vegas , Thompson quotes Samuel Johnson: "He who makes a beast of himself gets rid of the pain of being a man."

Two books on my shelf are treasures, particularly when I find my little world invaded by mindless talking heads doing weather, exposes or covering presidential elections. TheProud Highway: Saga of a Desparate Southern Gentleman, edited by Douglas Brinkley, and Fear and Loathing in America: The Brutal Odessy of an Outlaw Journalist, edited by Dougla Brinkley and David Halbestram. Read a few of these letters when you’ve had enough. Laughter rejuvenates the troubled soul

Posted by Doc Lawrence at 5:25 AM No comments:

MONTGOMERY, ALABAMA. My Alabama roots run deep. My wonderful mother was from the northeast part of this state near the west slope of Lookout Mountain. My paternal ancestors came over to Georgia from St. Clair County outside Birmingham. I’ve always felt a spiritual kinship with a cross section of the state’s cultural icons. It’s nearly impossible to be raised in the Deep South and not be influenced by Harper Lee, Truman Capote, Hank Williams, Nat King Cole and Emmylou Harris.

This is heartland in tune with nice accents. Examples are easy to find of why the gifted journalist Marshall Frady called the region “America’s Ireland.” Music, literature, dance, hospitality and a love of tradition are omnipresent. Being no stranger, I set out to visit again the grave of Hank Williams, It’s a pilgrimage I made before, a walk up the hill in the cemetery hoping to connect with those archetypes that Williams embedded in his music.

Paradoxes abound in Montgomery as they do throughout the South. The Confederacy was born here. Dr. Martin Luther King, Jr. preached at the Dexter Avenue Baptist Church. The Rosa Parks Museum is near the White House of the Confederacy. This was the home of the great folk artist Mose Tolliver and Zelda Sayre Fitzgerald. I plan to read again F. Scott Fitzgerald’s Tender is the Night, his account of their storied marriage.

Cuisine has special identity here and is proudly showcased. In Alabama, farm-to-table has been a way of life since pioneer days. Throughout the state, gourmet dining thrives alongside country and soul cooking. And these folks know how to do great barbecue.

The Alabama Shakespeare Festival, headquarters of the heralded Southern Writers Project, stands almost alone at the pinnacle of cultural acclaim in the South. I’ll attend a performance on their mainstage of NANTA, a cooking musical garnering across-the-board international praise.

It’s a few days of returning to things deep in my heart. Nostalgia, reassurance, comfort, flavors and fragrances, heritage and the joy of being immersed once more in the soul of the South.

Enjoy this amazing video from NANTA: http://www.youtube.com/watch?v=-uJ2pqBY6bQ
Posted by Doc Lawrence at 9:10 AM No comments:

ATLANTA. He was the unchallenged “father of fine wine” not only in Atlanta but the entire Southeast region. A French-trained chef, Jim Sanders stayed true to his Southern roots, producing a cookbook pairing the great dishes of the South (his recipes) with the great wines of France. No counterpart exists today.

Each July 4, Sanders served his barbeque pork along with his recipe Georgia Brunswick Stew, something he learned during his childhood days in Covington, Georgia. It is the traditional accompaniment to genuine barbecue and his recipe is credible.

PREPARATION:
Boil the chicken until it is very tender, cool, de-bone and chop the meat finely. Meanwhile, in a large pot over medium heat, braise the pork until half done. Add half the chopped onions, one chopped garlic clove, chili powder, thyme, cayenne pepper and a generous sprinkling of kosher salt and black pepper. Continue to braise until the meat is well browned, stirring every few minutes to break up any lumps and combine with chicken. Add the tomato juice and catsup and simmer for 11/2 hours. Add the rest of the chopped onions, another chopped garlic clove and simmer for another 30 minutes. Taste for salt and spoon off the fat before serving.

WINES:
Beaujolais goes well with Brunswick stew. It does not fight the spices and it has a lot of refreshment value. Otherwise, fairly heavy red wines like Cotes du Rhone complement the spice and flavors nicely as do several Italian reds like Chianti, Bardolino and Montepulciano.

NOTE:
Over three decades, Jim Sanders taught thousands in his wine classes in Atlanta. Although a product of the Deep South, Jim was more French than anything. After World War II, where he was wounded five times in the Pacific campaigns, he went to France, bicycled the countryside and found his passion in wine and food. He learned to cook in Lyon and Paris and met Armand Cottin, president of Labourie-Roi and through this brotherly friendship, developed his own cuvee of 179 Burgundies garnering numerous awards. Each day, in the rear of his retail wine shop in Atlanta, Sanders served most anyone who came in wonderful dishes he prepared along with pours from countless bottles of perfectly paired wines. There was no charge.

On the eve of his death in 1999, Jim Sanders entrusted me with his wine notes, lectures, stories and recipes.

Celebrate America and enjoy the Fourth of July!

Posted by Doc Lawrence at 5:11 AM No comments: