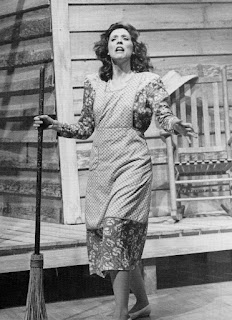 STONE MOUNTAIN, GA-It’s only one writer’s opinion, but if there is an American accent, it has to be very Southern. Scarlett O’Hara, Elvis, Jimmy Carter, Andy Griffith, Hank Williams, Dr. King, Harper Lee, Bill Clinton and Jack Daniel make some persuasive evidence. Actress Clarinda Ross spoke in the authentic voice of her Appalachian forbears as she performed her magnificent play, From My Grandmother’s Grandmother Unto Me at Stone Mountain’s Art Station Theatre. A Georgia girl who grew up in Western North Carolina and lives in Los Angeles, Ms. Ross crafted the story about 30 years ago in Atlanta with development assistance from David Thomas, who directs the performance.

What began three decades ago in an Atlanta garage soon became a runaway hit at the Spoleto Festival in Charleston, South Carolina and was featured in the Olympic Arts Festival in Lillehammer, Norway in 1994 and the Cultural Olympiad during the Summer Games in Atlanta in 1996. Ms. Ross also starred in the acclaimed PBS version directed by John David Allen.

For 90 minutes, I took a trip back to visit my ancestors from Georgia and Alabama and felt the unbridled joy from grand women named Stella, Minnie, Sarah, Carrie Lou and others I never knew but knew about. The audience recalled their own Southern women as Clarinda Ross began the story with the final days of the Cherokee in Georgia, particularly two Indian women who saved a child named Nancy- who became the first grandmother-from death after serious injury. Clarinda’s song  presented in Cherokee honors their holistic healing.

Verses from familiar hymns are performed throughout each generation of grandmothers including Beulah Land, Angel Band and Onward Christian Soldiers. Genuineness can be challenging when portraying Southern women then and now, but Clarinda, blessed with a good voice, does it right.

The audience is entertained with front porch stories of marriage, divorce, children, war, loss, education, the Great Depression and a whole lot of good humor. The recollections resonate. After all, who doesn’t enjoy visiting an ancestor particularly some of those remarkable women whose DNA we carry?


From My Grandmother's Grandmother Unto Me
by Clarinda Ross. Developed and Directed by David Thomas
…a 30th Anniversary Production.
More information: www.artstation.org  (770) 469.1105